The “Floristisch-soziologische Arbeitsgemeinschaft in Niedersachsen” (Floristic-Sociological Association in Lower Saxony) was founded on 13 August 1927 at a meeting of surveyors of the flora of the province of Hanover in Göttingen. A year later, the first volume of its own journal, the “Mitteilungen”, was published, followed by four more volumes up to 1939. In 1942, the association was forced to dissolve, only to be revived in 1946; from 1948 under the name “Floristisch-soziologische Arbeitsgemeinschaft”. The founding and re-founding of the association was mainly the work of Reinhold Tüxen, who, as chairman of the association from the beginning until 1971, was a main driving force in its development.

In the early days, the association really had the character of a working group with a small circle of members that convened at field meetings, workshops and conferences for lively discussions and the exchange of knowledge. More about the initial development can be found in the “Tüxen Festschrift” and the volume for the occasion of the 50th anniversary (“Mitteilungen Neue Folge 14 [1969] and 19/20 [1977]”).

After the Second World War, with the expansion of the association to the whole of Germany and neighbouring countries, the number of members grew rapidly, to over 900 in the 1970s, over 1000 in the 1980s and on to the current level of around 1050. The annual conferences, which have been held again since 1950 (Stolzenau an der Weser), became, on the one hand, a popular opportunity for further training and the establishment and maintenance of contacts for people interested in geobotany, but on the other hand also a mass event. The more close-knit character of earlier times was somewhat lost. The annual meetings were/are prepared and organised very successfully by experts with local knowledge. 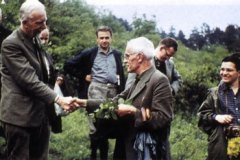 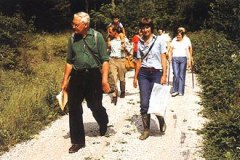 The sometimes time-consuming work of the Executive Committee was carried out by only three chairpersons, Reinhold Tüxen, Heinz Ellenberg and Hartmut Dierschke, during the past 76 years up to 2004, which is certainly a rare feat for associations. As the working group on the whole has become considerably younger in recent years and the workload on the board has increased, the board was expanded and rejuvenated in 1998. Angelika Schwabe-Kratochwil took over the position of first chairwoman from 2004 to 2013 while Werner Härdtle has been first chairman from 2013 to the current day.

A second pillar alongside the annual conferences and excursions has always been the members’ journal. After 5 issues of the “Mitteilungen” until 1939 and 22 volumes of the “Neue Folge” from 1949 to 1980, annual volumes of “Tuexenia” have been published since 1981. It is now considered one of the leading German-language geobotanical journals and, with a circulation of more than 1,000 copies, has a wide readership in Germany and abroad, largely as a result of the international exchange of journals. Many of our members have contributed to the success of the volumes with interesting papers.

With Volume 17, the scientific editorial board was greatly expanded and currently consists of 44 members from 13 countries. The journal now has a well-established anonymous review system for all submitted papers. The contributions are each assessed by two reviewers from a scientific associate editors’ board consisting of 20 people. A format according to international standard with abstracts and keywords is strived for.

The production of scientific papers is currently doubling every 10 years (or even faster) in the natural sciences; as a consequence, the number of publications in the last 10 years totals the number of all previously published works. Today, with electronic data transfer being so prevalent, the use of printed material is questionable and one must ask whether a printed journal like Tuexenia still makes sense. Furthermore, do works published here have any lasting value at all, when in many sciences much is outdated after a few years? In our opinion: yes!

Knowledge gained via geobotanical research does not just represent a quickly transient aspect of time, but remains of long-term importance as valuable comparative material. Especially today, we are increasingly dependent on good older literature to understand the rapid changes in the cultural landscape. Here, geobotany can be seen as a historical science rather than a purely future-oriented natural science. This seems to be a reason for the low esteem that geobotany sometimes wrongly enjoys in other biological branches.

Tuexenia will therefore continue to be published and should reflect the diversity of research directions of the members of our working group as broadly as possible. In contrast to many comparable journals, in-depth documentation of study data (notably via detailed vegetation tables) continues to be one of its defining characteristics.

The “Synopsis der Pflanzengesellschaften Deutschlands” (Synopsis of the Plant Communities of Germany) provides a certain complement with more synthetic observations. In a series of booklets, short overviews of wider groups of plant communities (classes, orders, associations), with a predominantly syntaxonomic orientation and supported by overview tables, are compiled for the whole of Germany. For more information, see Synopsis of the Plant Communities of Germany.